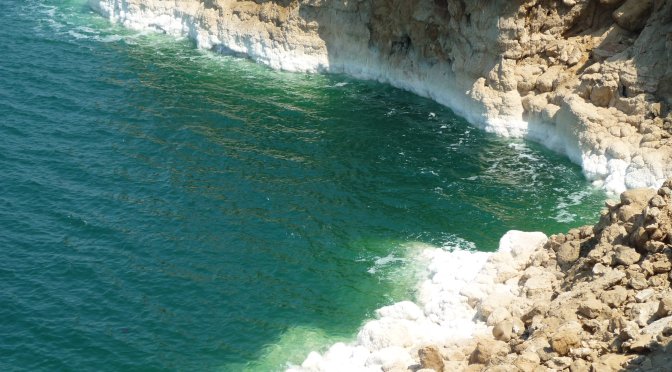 The lowest point on land is the Dead Sea . The Dead Sea is a large salt lake , on the border between Israel and Jordan, and the basin is located at the lowest point on Earth. It is a terminal lake , meaning that it has no emissaries , and is fed by the waters of the Jordan. The degree of salinity is much higher than that of the oceans, which prevents almost all forms of life . There are in fact only microorganisms , algae and one species of shrimp , but there are also rich mineral reserves . In historical documents, the Dead Sea is indicated by various names : Sea Salt , Sea and Sea of Destiny Aggressive . The Dead Sea in Palestine , on the border between the state of Israel and Jordan , is the lowest point in the world , being approximately 395 meters below the sea level.

The Dead Sea is a sea no outlet , which is a terminal lake which for thousands of years has received the waters of the Jordan River and other smaller rivers , such as the river Arnon.

The trip from Amman to the Dead Sea is 55 km. On the road a stone reads: ” Sea Level “, but the Dead Sea itself can only be achieved after a further descent of 400 m below this signal. The sea has a high concentration of salts and minerals. This concentration is due to two basic reasons:

–  For thousands of years, the water which is rich in salts , has been removing soils  from the rocks of the Jordan River and other rivers have been channeled in the basin;

–  The Dead Sea , lying nearly 400 feet below sea level rise , has no emissaries and all the water is coming progressively. In addition, losses due to the strong evaporation because of the hot, arid climate and low rainfall, have favored the concentration over time of a huge amount and characteristic of salts.

3 thoughts on “Which is the lowest point on earth?”