The Himeji Castle is located in Himeji City in the western Hyogo. It was constructed in the mid-14th century, and after a three-layer castle tower was built by the order of the man of power Toyotomi Hideyoshi in the 16th century, Ikeda Terumasa, a feudal lord of the castle rebuilt it further in the 17th century. Its figure was likened as a white heron spreading its wings, and thus called the Hakuro-jo, or White Heron Castle. It was designated as a national treasure in 1931, and as the World Cultural Heritage in 1993.

The Tenshukaku (castle tower) is the main structure and has 5 stories in appearance but 6 stories inside and a first basement. All structures are covered with white plaster unique to Japan. The roofs are covered with kawara tiles and white plaster is applied to the joints. The sturdy, magnificent structure and elegant appearance, as well as complex and tactical defense devices make the Himeji Castle the most prominent castle in Japan.

Restoration of Himeji Castle Main Keep<2009-2015>
After a lapse of more than 45 years since the major restoration in 1950’s -1960’s,Himeji Castle is undergoing a full-scale restoration.This five-year project is focusing on re-plastering damaged and grimy plaster walls and replacing the roofing tiles on the main keep.During the renovation work,it is covered by a roofed scaffold structure,but Himeji Castle is not only the main keep.Visitors can enjoy more than 70 buildings designated as Important Cultural Properties of Japan as well as many interesting devices intended for attackers on the way to the main keep.
For about three years from March 26,2011,you can go up to the top floor of the roofed scaffold structure by the elevators and get a look at the repair process and also enjoy a magnificent panoramic view from a height of 50 meters above the ground.
The scaffolding will be removed by spring 2015. 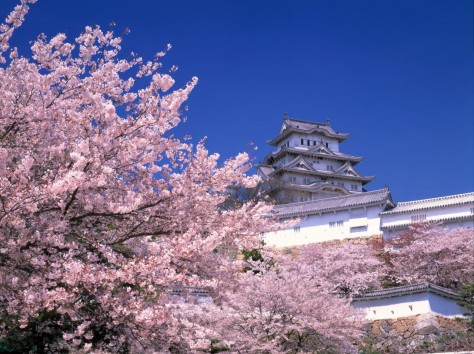 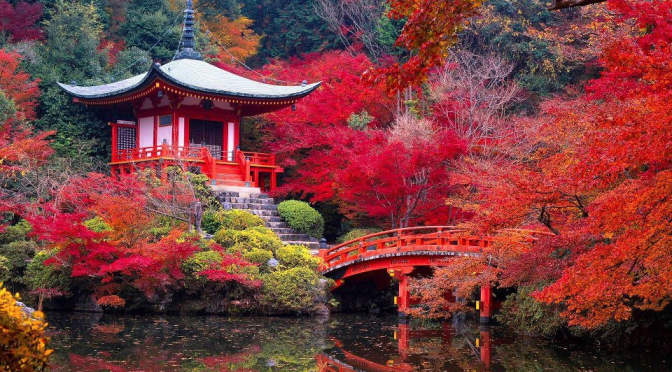 The garden of Saihō-ji is acclaimed by many as Kyoto’s most beautiful garden and is listed as a UNESCO World Heritage. It is especially famous for its moss garden, for which reason it is also commonly known as Moss temple or Koke-dera (苔寺).

In 1339, the famous Zen monk Musō Soseki became the head priest of the temple and remodeled the garden. For him, creating gardens was part of his zen meditation routine. He founded a lot of temples and built or remodeled their gardens, but Saihō-ji is clearly his masterpiece.

Shogun Ashikaga Yoshimitsu (1358-1408, 足利義満) sat here in meditation in the upper part of the garden commemorating the garden’s creator Musō Soseki. Yoshimitsu’s grandson shogun Ashikaga Yoshimasa (1435-1490, 足利善政) loved this garden so much that he modeled his own retreat, the Temple of the Silver Pavillion – Ginkaku-ji (銀閣寺), after Saihō-ji. Famous monks of different Buddhist sects have been head priests of the temple – namely Kūkai (774-835), Hōnen (1133-1212) and Musō Soseki (1275-1351). During the Edo period the temple fell into disrepair. It must have been at this time that moss slowly encroached the garden until it covered all of it. Today, there are roughly 120 types of moss in the garden.

The best times to view the garden are during the rainy season (mid-June until mid-July) and in autumn, when the red and orange of the maple’s leafs contrast nicely with the lush green of the velvety moss. 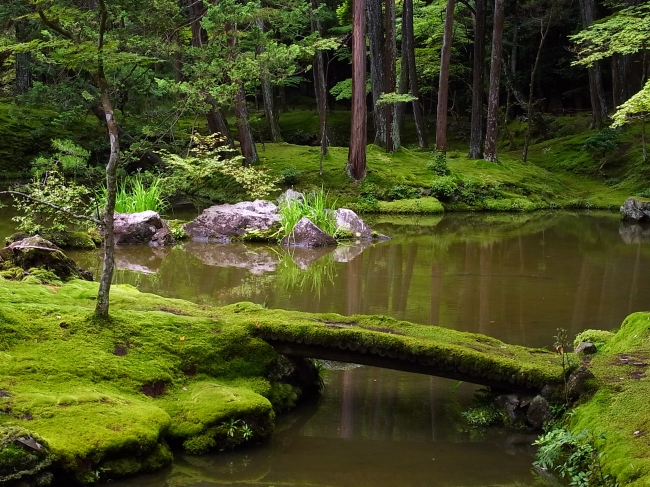